Art of the Shipbuilder 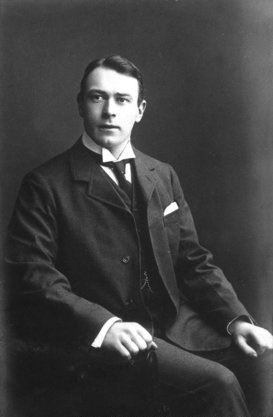 “A naval architect should be able to design, draw, calculate, lay down, cut out, set up, fasten, fit, finish, equip, launch and send to sea a ship out of his own head. He should be able to tell beforehand at what speed she will go, what freight she will carry, what qualities she will show in a sea, — before it, athwart it, against it, — on a wind, close hauled, going free, — what she will stow, and carry, and earn and expend. On his word you should be able to rely, that what he says, his ship will infallibly do.”

TITANIC and her two sisters Olympic and Britannic were constructed under the huge Harland & Wolff gantry, which was fitted with traveling cranes and other hoisting machinery. Harland & Wolff amassed enough industrial muscle to build two of the three vessels simultaneously, with the third started after the first, OLYMPIC, was launched. Although 50% larger than her Cunard competitors, Lusitania and Mauretania, TITANIC was of conventional design, and built from the usual mild steel shipbuilding material of the time. Although fast for her size, TITANIC wasn’t designed to sweep speed records, but rather provide comfortable crossings while navigating the tempestuous North Atlantic. TITANIC and her sisters were always relatively safe ships to begin with, but TITANIC got into an extreme situation that the method of her construction did not prepare her to deal with. 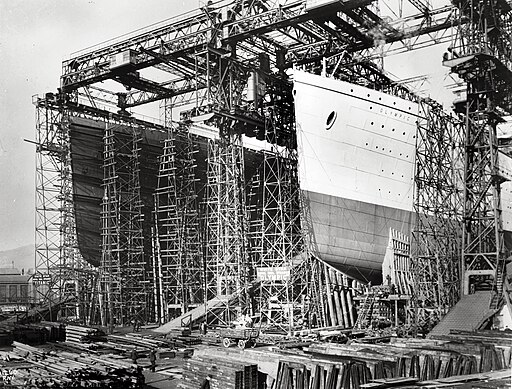 TITANIC and Olympic Under Construction 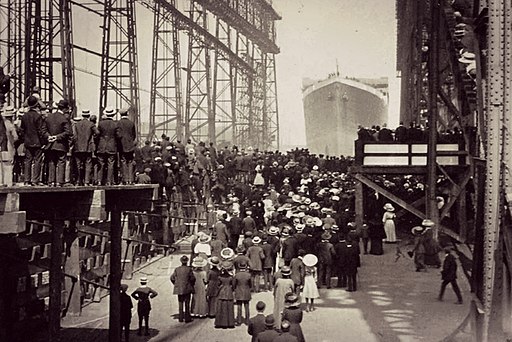 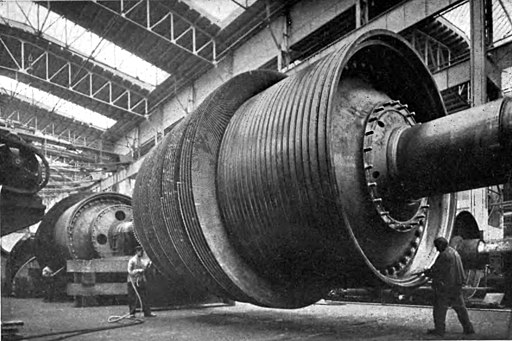 Rotor of One of the Low-Pressure Turbines of the Imperator (similar to TITANIC, launched May 1913)

TITANIC’s propelling machinery was developed by her builders, Harland & Wolff, of Belfast. A novel arrangement of reciprocating and turbine engines, the system was fitted in several smaller vessels with considerable success. Provided with three propellers, the two reciprocating engines, each over 1,000 tons, turned the 23.5-foot diameter, 38-ton three-bladed wing propellers, while a turbine drove a three-bladed 17 foot diameter, 22-ton propeller. The reliable performance of the machinery was evidence of its sound design and operation. In addition, this type of combination machinery was more economical regarding fuel consumption, providing cost savings to the owners. Another benefit of this arrangement is that the center propeller was in line and directly ahead of the rudder. This effectively placed the rudder in the quick water, or slip stream, of the propeller, making it effective in turning the ship. When maneuvering in port, the center turbine, and its propeller, were disconnected as the turbine could only revolve in the ahead direction, whereas the reciprocating machinery could be reversed, and assist in maneuvering the ship in close quarters.

Steam, at 215 pounds per square inch, was supplied by 29 coal-fired boilers devouring thousands of tons of coal during an Atlantic crossing.

Extensive preparations were needed to “coal” a ship, and it was a major nuisance to protect accommodations from coal dust. Completely cleaning a vessel after coaling was labor-intensive, costly, and time-consuming. To get the ship moving through the water, skilled stokers and firemen fed the furnaces to build up a uniform bed of red-hot coals that boiled and generated steam from the water held within the boilers. After firing the furnaces and tending the fires, they then cleaned, hauled, and discharged ashes overboard. Coal smoke from the funnels had to be kept to a minimum, lest the passengers and decks became polluted with cinders. The objective of this gargantuan effort was to maintain steam pressure high enough to propel a large express liner at up to 28 mph through the sea and keep her on an exact schedule. In a manner of speaking, then, large coal-powered steamships were essentially moved by hand.

Eventually, coal was supplanted by heavy oil. Oil fuel was relatively easy to pump out of the earth and transport by barge. Loading oil on board required simply pumping it into a ship’s tanks. The oil was then sprayed under pressure into the furnaces, creating the intense heat required to make steam for the engines. There was no need to stow the coal, tend to fires, or dispose of ashes. The ease of handling and burning oil reduced crew size by eliminating the need for hundreds of stokers and firemen. Oil fuel harmonized perfectly with the turbine engine, and boiler rooms, like turbine engine rooms, became machinery spaces of relatively quiet, clean order. Britain saw the long-term advantages of oil fuel as essential to the efficiency and mobility of her fleet, and naval vessels experimented with oil firing as early as 1904. 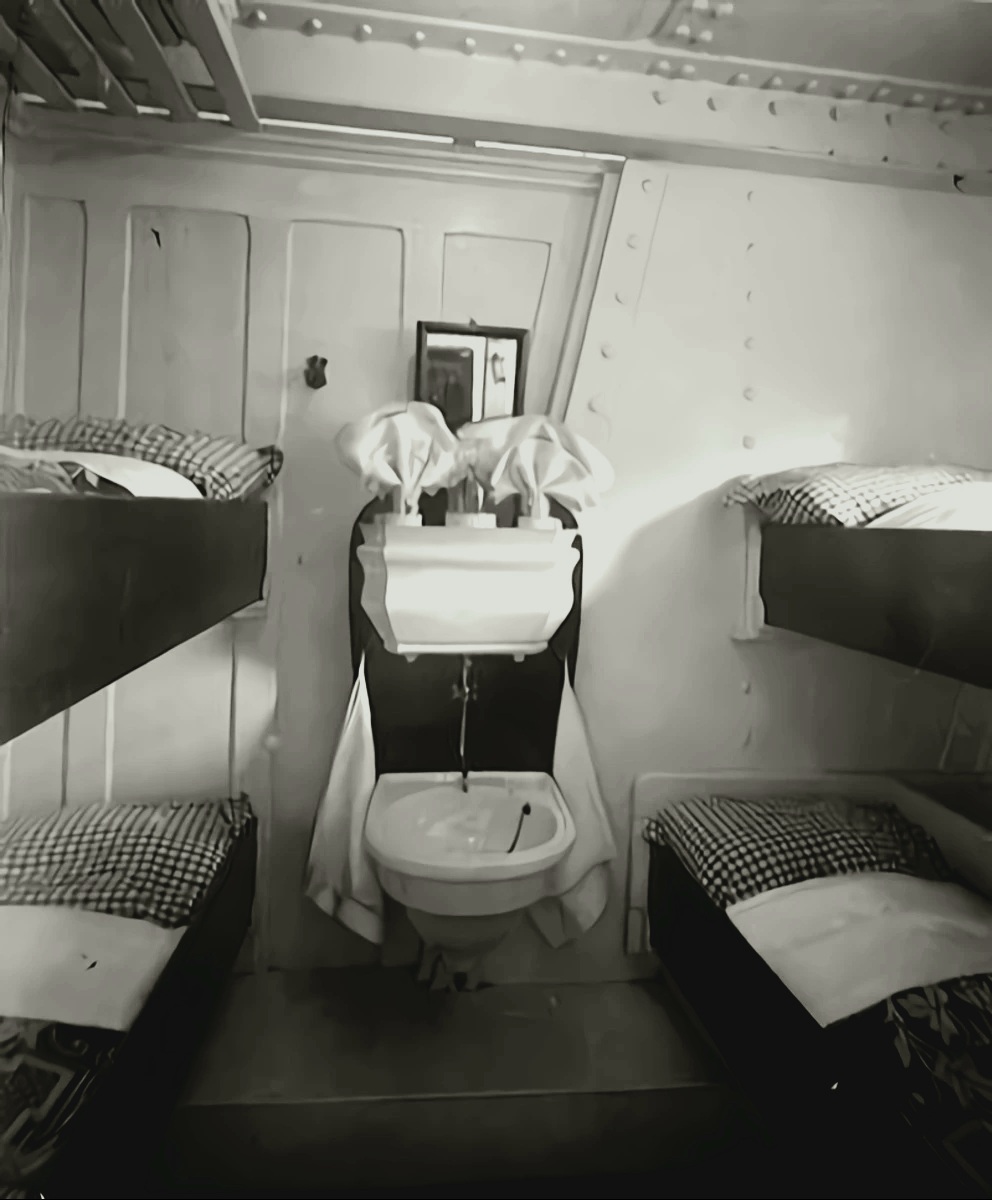 The TITANIC, and her older sister the Olympic, represented an addition to global merchant shipping of nearly 100,000 gross tons. They used their great size to advantage in providing considerably more space for passengers when compared with other premier liners of the day. The White Star Line touted its superior accommodations, including two-person cabins available in Third Class.

2nd Class Library on the Olympic

First Class provided all the amenities one would expect: suites with private promenade space, a vast dining room, and the run of the best parts of the ship. These passengers would never need to wait, or line up for service, especially in the main dining room and restaurant, located higher up in the ship. 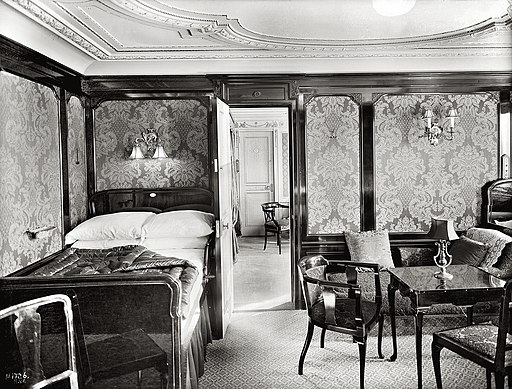 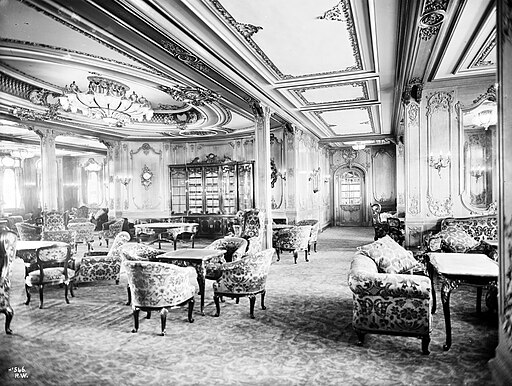 The culinary departments were provided with the latest equipment, with First and Second Classes sharing the kitchens and bakery. Third Class also was well provided for, with the kitchen and bakery adjacent to the Third Class dining salon.

The sanitary system disposed of waste directly overboard, after flushing it with salt water through storm valves, which prevented water from backing up the discharge pipes. Public lavatories were grouped by class throughout the ship, and each deck was provided with toilets and baths. These were arranged vertically, deck by deck, to simplify the plumbing. Public rooms were provided with lavatories for convenience. Bathing facilities, located adjacent to the water closets (toilets), were maintained by cleaning stewards. Only First Class had anything like private toilets in their cabins. The deck and engine crews were generally housed in dormitories, with senior officers and engineers provided with two-berth or single cabins. 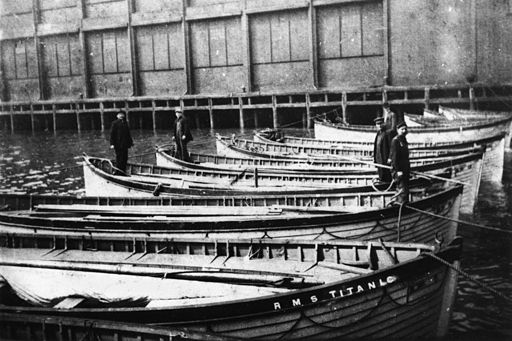 The absence of sufficient lifeboats on the TITANIC, and the time to launch them if they were available, compounded her tragic loss. The TITANIC was certified to carry 3,335 passengers and crew. Provided with 20 wooden lifeboats, their full-load capacity was 1,178, or slightly more than a third of all on board. The lifeboats were tested and inspected prior to being placed on board ship. According to the Board of Trade Report of Survey, the lifeboats could be rapidly launched and were provided with all necessary equipment, such as oars, water, food, and a sailing rig. In addition to the lifeboats, the ship carried 3,500 lifebelts and 48 lifebuoys.

The Welin-type davits that were fitted on board for launching the boats were of the latest type and designed to hold and launch three boats, stowed stacked upon each other between the davits. This was in anticipation of the expanded Board of Trade Rules for increased lifeboats on vessels of greater tonnage. All British vessels came under the Board of Trade Rules, and no transatlantic liners of the day carried boats for all. But, even having enough boats for all raises yet another question: Would everyone on board have been rescued? There was barely time to get the 20 boats away, and the last ones leaving either capsized or were hastily and improperly prepared to float. (Some boats, called “collapsibles,” had to have their canvas sides raised after being launched, to be able to float safely). Whether more boats would have saved more lives-—in the situation that befell TITANIC--is questionable. Could an additional 40 or so boats have been loaded and launched in the time available? The answer is, probably not.

British Board of Trade Survey Approval for TITANIC

It is sometimes assumed that because she was lost on her maiden voyage, the TITANIC was somehow deficient in design and construction. Like all vessels built in her class (the term used for a vessel that is built to a classification society, like Lloyd’s Register), the ship and the materials used in her construction were continuously inspected. She was launched, fitted out, successfully conducted her sea trials, and declared fit in all respects for sea by the British Board of Trade. The certification form also states that the vessel had all life-saving equipment required by the British Board of Trade Rules. These rules applied because the TITANIC was built and put into service by the British, even though she was owned by J.P. Morgan’s International Mercantile Marine, which owned a number of steamship lines, including the White Star Line operating the TITANIC.

After successful sea trials, TITANIC departs on her maiden voyage